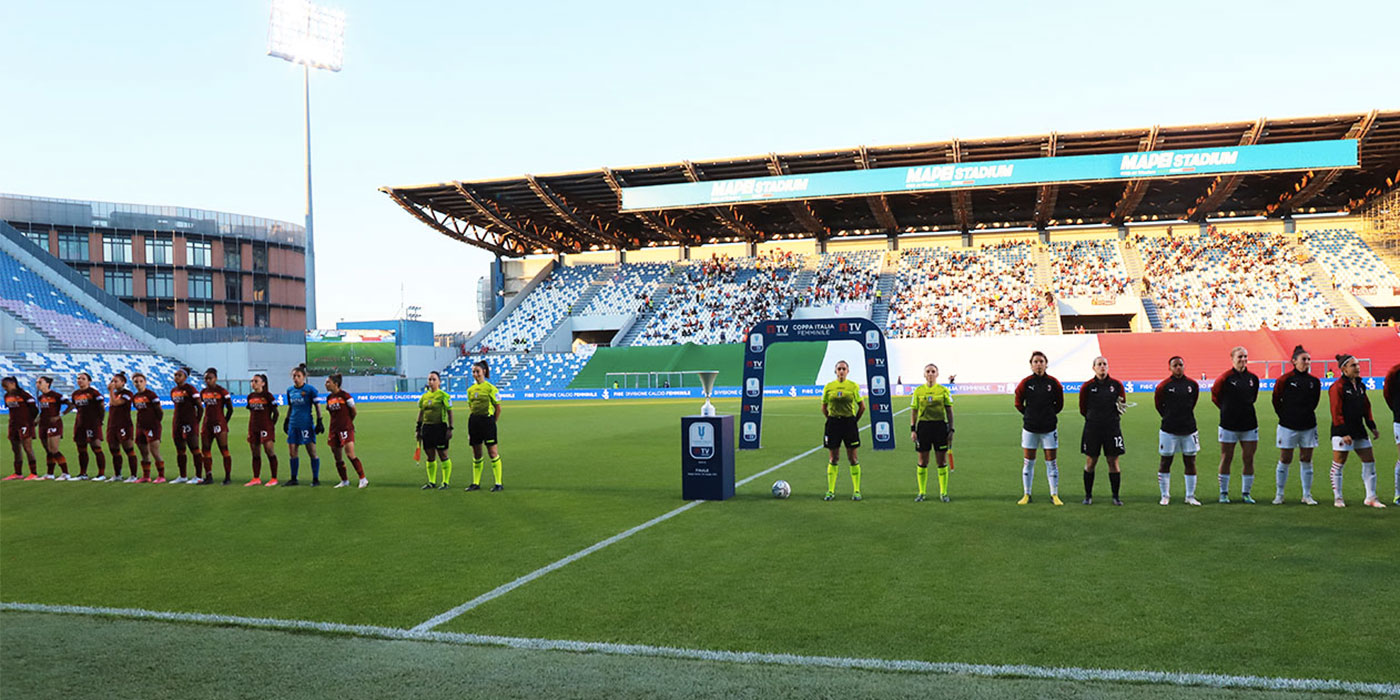 The Women's week ends with the Coppa Italia Final

Five years after the UEFA Women’s Champions League final, won by Lyon in front of more than 18,000 spectators, the Mapei Stadium was once again chosen as the venue for an important event in the women’s movement: the TIMVISION Coppa Italia final. The prestigious trophy was awarded to AS Roma who won against AC Milan after the penalty shoot-out (click here for the photogallery of the Final – Pictures Vignoli).

“Finding such well organised facilities is not easy, we asked Sassuolo who were ready and welcomed us with joy. The Mapei Football Center, which hosted the Primavera Final Four, is a place where you feel at home and playing the Italian Cup Final at Mapei Stadium was an important spot for women’s football. I would like to thank Sassuolo Calcio for this opportunity and the local institutions, it was a wonderful experience” – The words of the president of the Women’s Football Division, Ludovica Mantovani.

“Having concluded the activities of the week dedicated to women’s football, we can once again be satisfied by the appreciation of the work of our club repeatedly stressed by FIGC. It is also a great joy to have been able to reacquaint with our public and to have been able to organize activities for the girls, clear signs of hope for a return to normality. A special thank you to FIGC for choosing our facilities as venues for these prestigious events, we are happy to be among the reference clubs in the panorama of women’s football,” said Director Alessandro Terzi.

On the first day (Thursday 27 May) the semi-finals Juventus-Florentia 6-0 and Roma-Inter 2-0 were played. Between the two semi-finals played at Mapei Football Center, young players went on the field in an exhibition match between Women’s Sassuolo Under 13 and Sporting, followed by the award ceremony for the best players in the Serie A TIM Vision 20/21: for Sassuolo, Kamila Dubcova was awarded as the best midfielder and Haley Bugeja as the best young player in the league, together with Laura Giuliani (Juventus goalkeeper), Lisa Boattin (Juventus defender) and Cristiana Girelli (Juventus forward). At the end of the award ceremony Haley Bugeja stopped to take some photos with the girls playing on the pitch. At the end of Roma-Inter, coach Gianpiero Piovani met the staff of Sassuolo’s women’s youth sector in a refresher seminar dedicated to the weekly programming of the first team’s activities (click here for the photogallery of the first day).

On the second day, Friday 28 May, in the morning, there was the presentation of the TIM Vision Coppa Italia Final which was attended by the Organising Director Andrea Fabris and the Head of Development of the Women’s Football Area Alessandro Terzi. For the occasion, the Trophy was displayed in the Sala del Tricolore of the Municipality of Reggio Emilia.

From 5pm to 7pm, Mapei Football Center hosted an Open Day open exclusively to girls aged 6 to 13, which was a great success: the many girls who took part in this fun and sporting event, divided into different age groups, were involved by the black&green instructors in games and short exercises with the aim of giving the girls the chance to measure their skills and experience the game of football as well as spending two hours of fun together. At the end of the day all the girls received a Sassuolo gadget. After the Open Day there was an institutional moment between Sassuolo Calcio, the Municipality of Sassuolo, the clubs participating in the Final Four Primavera and FIGC (click here for the photo gallery of the second day).

On Saturday 30 May the last official matches of the Primavera competition were played at Mapei Football Center: at 10.30 the 3rd/4th place final won by Inter and at 4.30 the 1st/2nd place final where Roma beat Juventus. The Finalissima was preceded by the Under 13 Women’s exhibition match Sassuolo-Rapid Viadana (click here for the gallery of the third day).