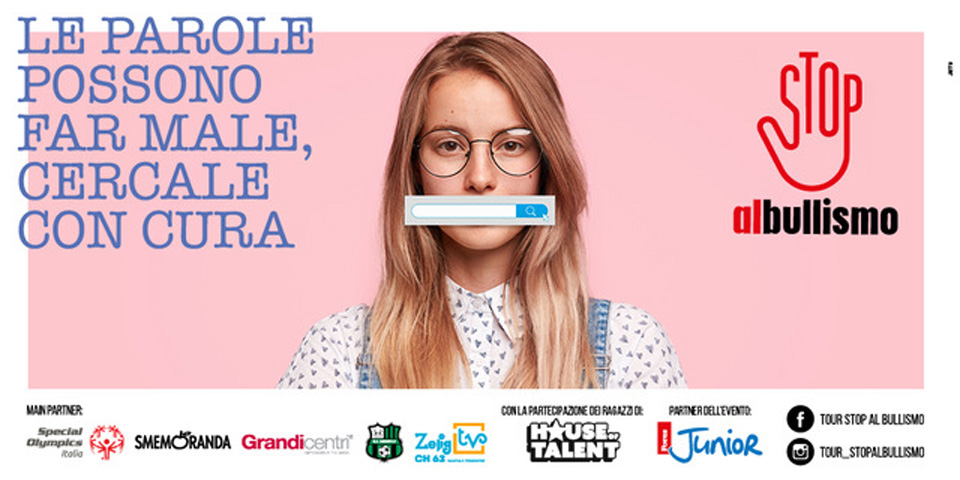 For some years, phenomena such as bullying, cyberbullying and aggressive conducts among children and teenagers have become increasingly frequent. These events rise concern about the welfare state of today’s young people, who are more and more exposed to violence and prevarications of all kinds and are often incapable of empathy towards their peers. That is what prompted CBRE to launch this initiative, to draw attention on these issues which are always current.

Sassuolo Calcio, always sensitive to social issues, especially related to young people and families, is proud to join this initiative of the management company CBRE by making available at Mapei Stadium, during Sassuolo-Napoli (Sunday March 10th), a station to invite fans to become actors of the social campaign against Bullying and Cyberbullying by taking a picture that will then be posted on the Instagram profile of the Tour as well as on Sassuolo’s. The station will be set up within the stadium (stand “Tribuna EST” area).

The ‘Stop to Bullying’ tour will involve 18 Italian malls, including the shopping center I Petali on Friday March 15th, to meet students in their new places of aggregation and socialization: Shopping malls. Each stage of the event, lasting an entire day, will be made of shared meetings between students, teachers and parents, led by Dr. Rosanna Schiralli and Dr. Ulysses Mariani, psychologists and psychotherapists, who are known for their articles addressed to parents and educators. Both are considered great experts in Italy of development psychology and emotional education method, which they first introduced in Italy.

The first crew of Italian influencers will be testimonial of the national initiative: The House of Talent, well known by teenagers for their participation in the famous talent-show broadcast by Rai channels, will attend every stage in the adhering shopping centers managed by CBRE, for an opportunity to engage with young people on the prevention and fight against bullying, but also to thank their fans and share this important day of growth and awareness of oneself and others.

Hereafter the program of the event (which will be the same for every stage):

For more information and updates on stages, see the Facebook page Tour Stop al bullismo and the Instagram profile tour_stopalbullismo.