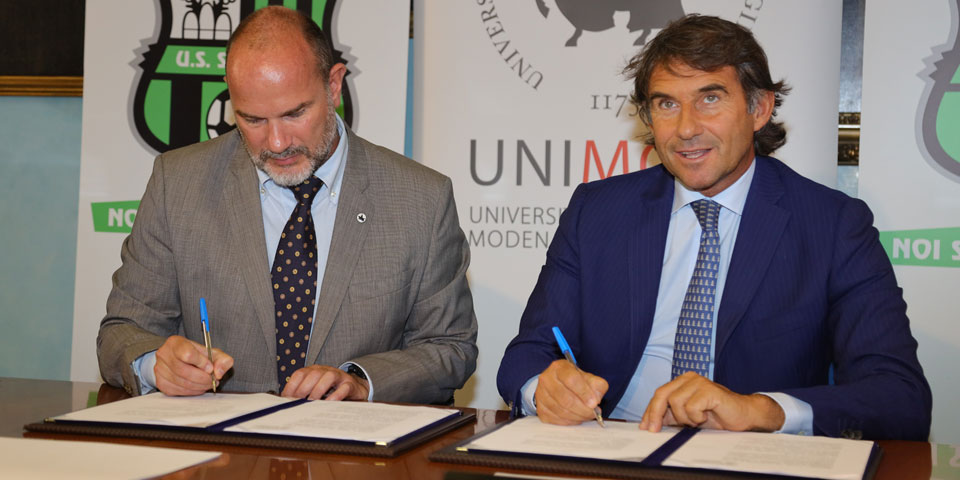 This morning, in the Blue Room of the Rector’s Office of the University of Modena and Reggio Emilia, the memorandum of understanding signed by UNIMORE and U.S. Sassuolo Calcio was presented, a memorandum that aims to carry out the creation of a center of excellence that represents a point of contact in academic, sports and business. “With this Memorandum – comments the Delegate of the Unimore’s Rector Prof. Marcello Pellicciari – our University takes a further step in the construction of a university that wants to think as an Anglo-Saxon one. That is, a university that aims to reconcile cultural and physical well-being and that looks at training and sport as complementary aspects of life. The willingness of an established company like Sassuolo Calcio to support us in this project becomes a strength of our idea of University”.

It is the first experience in Italy of an organic collaboration between a great professional sports club and a university. The common objective is to bring these two realities closer together and make them compatible in the interests of athletes and university students through a series of initiatives that bring together training activities and cultural and sporting aspects.

The agreement between the two important institutions, both strongly committed – although with different aims – to working with young people, was signed this morning in Modena in the Rectorate in the presence of U.S. Sassuolo Calcio’s CEO Giovanni Carnevali, Delegate of the Unimore’s Rector for Sport Marcello Pellicciari and U.S. Sassuolo Calcio’s Secretary General Andrea Fabris. “We are very happy to have signed this agreement with the University of Modena and Reggio Emilia – stated U.S. Sassuolo Calcio’s CEO Giovanni Carnevali – an agreement that further consolidates our ties with the territory. The aim is to provide useful tools for growth for Unimore and Sassuolo Calcio, creating meetings between two worlds apparently distant but which actually have a common factor: young people. We hope that this starting point will offer ideas for study and work for many youths: sports sector is growing very rapidly and increasingly needs skills in various areas that we hope we can help to find with Unimore”.

The agreement, which has a three-year duration, tacitly extensible to six years, in addition to identifying a series of benefits and services for the club members, enrolled at University, to support “success in university studies”, will allow Unimore students to carry out their stage at U.S. Sassuolo Calcio headquarters and at any interested partners and to enjoy special discounts on both tickets and season tickets for the matches, but also to make available to CUS Modena and Reggio Emilia technicians and facilities for the promotion of sports practice. There will also be a commitment to define incentives to reward merit in studies and excellence in achieving the degree and to promote international mobility. A Technical Table composed of its representatives appointed by Unimore and U.S. Sassuolo Calcio, specifically the President of Unimore’s Committee for Sport and the President of CUS Modena and Reggio Emilia as well as U.S. Sassuolo Calcio’s CEO and Secretary General, will oversee the implementation of the project and will report annually on the progress of the initiatives made or to be planned.

Hereafter the photogallery of the presentation (Pictures Vignoli) 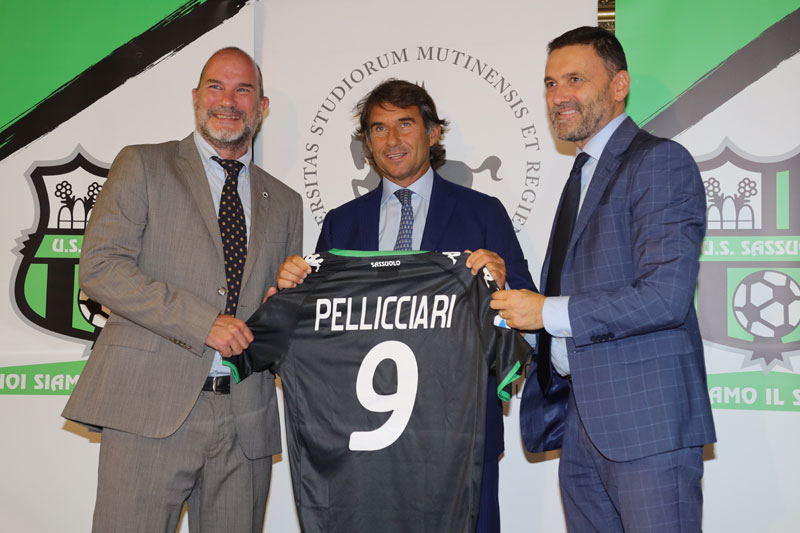 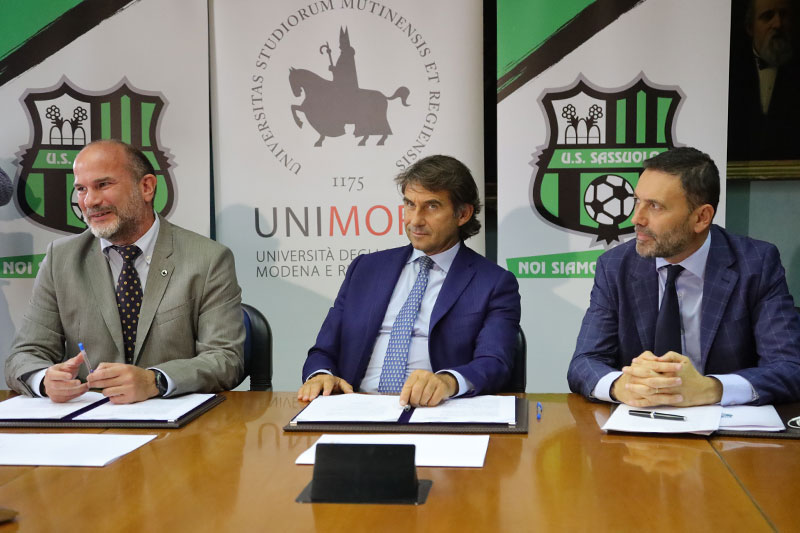 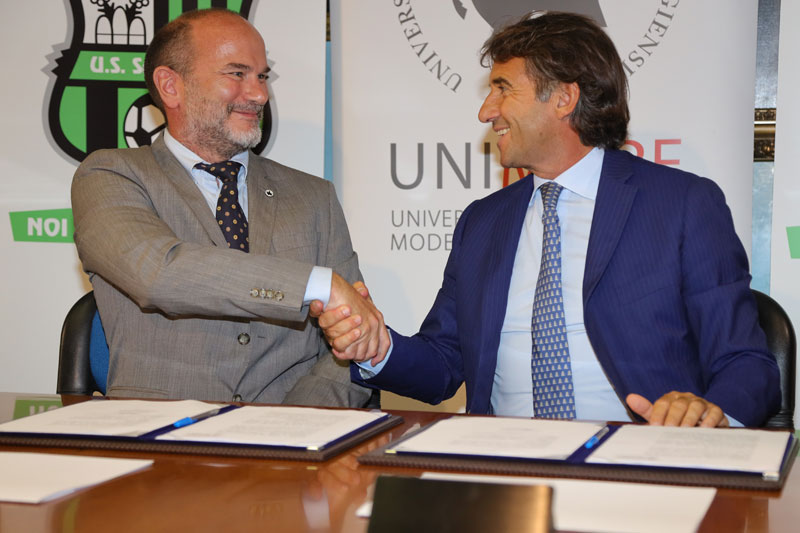 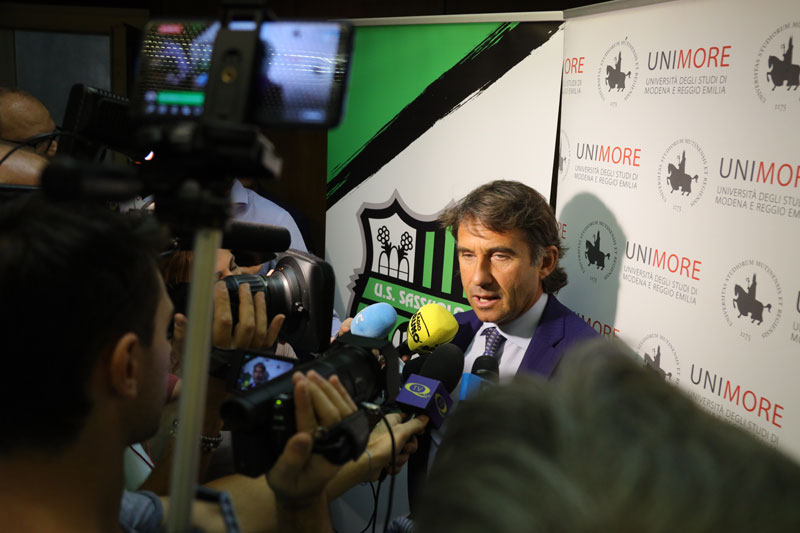 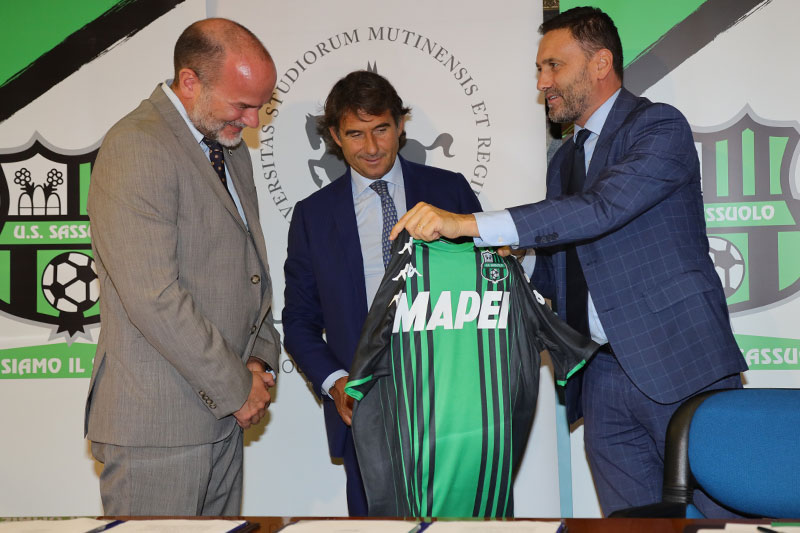