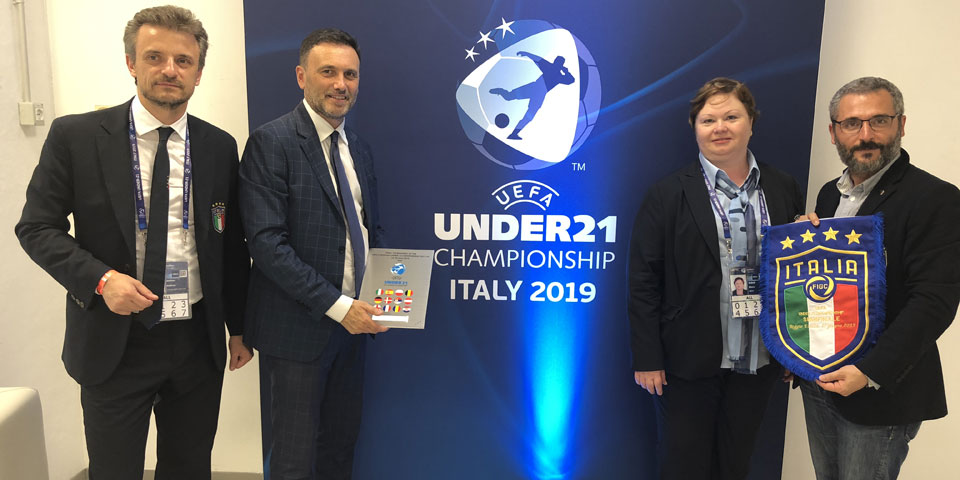 Yesterday, in occasion of the semi-final of the European Championship Under 21 between Spain and France, taking place at Mapei Stadium, UEFA wanted to congratulate the City of Reggio Emilia and Sassuolo Calcio both for the great reception of teams and fans from all over Europe and for the perfect support in the organization of the four matches of the European championship: Belgium-Spain, Belgium-Poland, Italy-Belgium and Spain-France.

Elena Kobak, the UEFA Delegate at the stadium, awarded a plaque to the Secretary-General, Mr. Andrea Fabris, on behalf of President Ceferin for the excellent organization of the event. Andrea Stefani, on behalf of the FIGC Federal President, Mr. Gravina, also congratulated the Black&green club, the city and the administration represented by Mauro Rozzi, Chairman of the Foundation for Sport of Reggio Emilia.

Mapei Stadium has now acquired an internationally recognized prestige and has been a point of reference of this European championship with an attendance of more than 35.000 people over the matches in Reggio Emilia.

The new media room, the new working areas for media and photographers as well as the renovated media stand will allow the stadium to host great events in the future.

In addition, the choice of the Belgian National team U21 to train at Mapei Football Center, confirming once again the cooperation and exchange between Sassuolo Calcio and so many stakeholders from European football, was a source of satisfaction.